The 1920s is now officially a century ago but the looks and styles from the decade are still incredibly fashionable today.

Contents show
1 About The 1920s
2 The Big Changes In The Roaring 20s Fashion
2.1 Swapping Silhouettes
2.2 Hairstyles And Accessories
2.3 Pearls Were Everywhere
3 Flappers: What Are They And What They Wore
4 Roaring 20s Dresses You Can Buy Now
4.1 VIJIV’s 1920’s Flapper Dress
4.2 SL Fashion’s Metallic Dress
4.3 BABEYOND Women’s Flapper Dress
5 Conclusion

Today, the Roaring 20s has become a popular costume for events and celebrations but if you love vintage fashion, you may want to wear a Roaring 20s style outfit or dress for formal occasions. 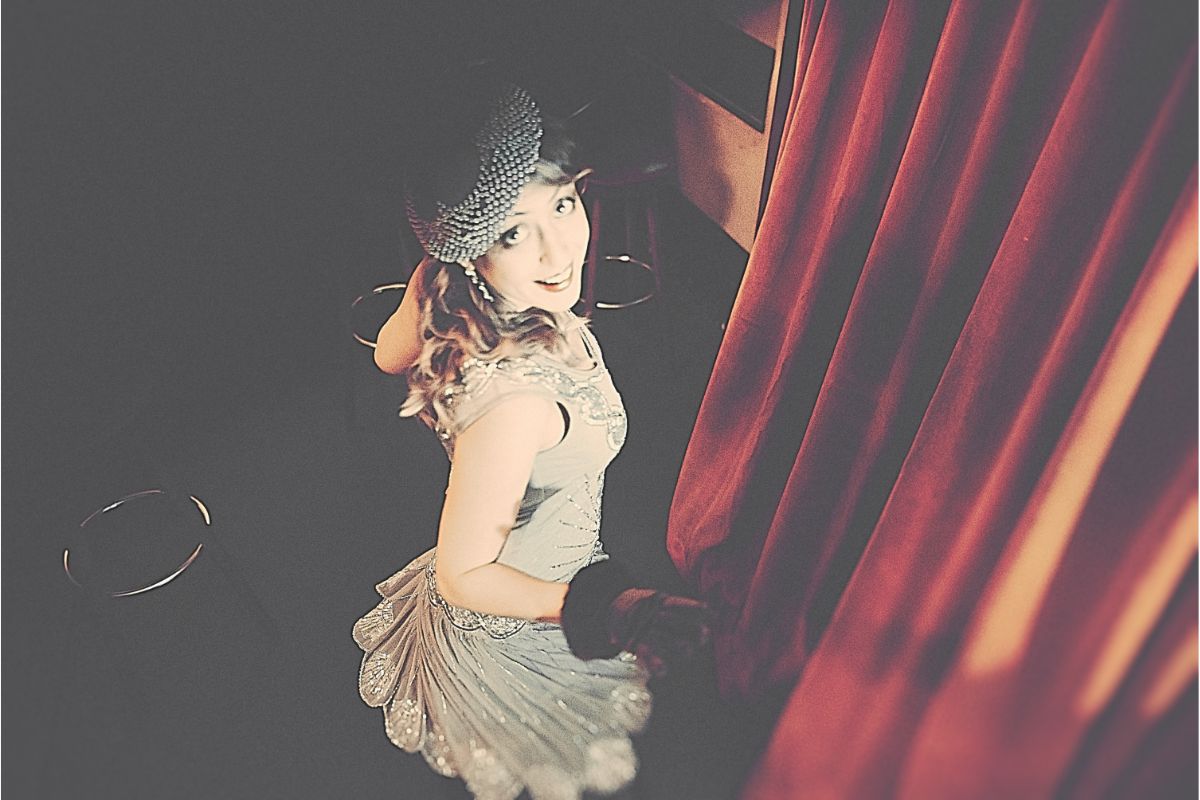 If so, then this is the guide for you. We are going to be diving into the dress styles of the Roaring 20s so you can pull together an authentic outfit that reflects the time period. Check out the information below!

The 1920s came hot on the heels of the end of the First World War and with it came a massive change in attitudes and behavior.

Women were now granted the right to vote in both the US and the UK, economies were beginning to recover from the hardships of the war, jazz was hitting every bar on both sides of the pond, and speakeasies were everywhere despite prohibition.

For women, style icons were popping up everywhere - Coco Chanel, Louise Brooks, Greta Garbo, Josephine Baker, and so many more.

As a result of all this change, the 1920s became known as a decade of decadence and celebration, of glitz and glamor, with less inhibitions and more freedom.

Of course, the Roaring 20s was not perfect. Segregation was still in place in the US, women were still restricted by social expectations and laws, and the decade ended with the crushing Wall Street Crash of 1929 and extreme poverty across the world.

However, the Roaring 20s is considered the first sign of significant change in future attitudes - and this is clearly reflected in the fashion styles of the time.

The Big Changes In The Roaring 20s Fashion

The 1920s brought a lot of changes to women’s fashion and heralded the future progression in women’s rights and freedom.

During this decade, traditional rules were broken and women began to rebel from the fashion (and social) norms of the past century.

So, if you want to replicate that Roaring 20s look, you need to keep these drastic changes in mind. If you don’t, your outfit won’t feel authentic and will instead carry styles that are outdated by the 1920s.

One of the most iconic elements of 1920s fashion is the change in silhouettes in women’s fashion.

Silhouettes have been a dominant part of women’s fashion for centuries. For hundreds of years, women have been expected to have a clear distinction between the upper and lower parts of their body with a defined waist, clear bust, and wide hips.

For the last century before the Roaring 20s, this was the norm - and corsets and full skirts reigned supreme as women used these to help them achieve the fashionable silhouette.

This all did a 180 degree flip in the 1920s. Suddenly, a sleek silhouette was all the rage. No more tight corsets or dresses, long full skirts, or big busts.

Dresses were supposed to place the waistline on the hips rather than the actual waist, introducing the drop-waist style of dress. This meant that dresses were now looser and figures less defined.

The bottom hem of dresses rose up to mid-calf or just under the knee, exposing the ankle and allowing more women to show off their shoes. This further helped streamline the silhouette.

So, when dressing for the Roaring 20s, you need to try and keep a straight and lean silhouette.

The waist must drop to the hips, skirts fall in line with your legs instead of flaring outwards, and your bust shouldn’t be lifted or boosted.

This can easily be achieved whether you are wearing a dress, blouse and skirt, or pants.

This silhouette is the most iconic part of the style of the Roaring 20s. Without it, then your outfit won’t feel authentic.

Another massive change in women’s fashion during the 1920s was the hair.

Up until the Roaring 20s, women were always expected to wear their hair long. It was seen as a sign of femininity and all the latest hairstyle trends addressed different ways women could pin up and style their long locks.

But the Roaring 20s did something completely different - they chopped it all off!

Women’s hair was worn short in the Roaring 20s, with stylistic waves and curls or straight cut bobs. However, hair accessories became more popular for both everyday and nightwear.

During the day, women wore cloche hats while running errands but in the night, they would don feathers, jeweled hair clips, and glitter headbands.

Now that most women wore their hair short, it meant that their necks were more exposed. Drop earrings became more popular and they were coordinated to match or complement the accessories worn in the hair.

This means that wearing a Roaring 20s outfit with long loose curls and no headwear will make you look out of place.

Try cutting your hair short or styling it into a faux bob or bun to hide its length. Top it all with an accessory, and that’s your hair sorted!

After the misery that came with the First World War, people began to splash out and live a little more luxuriously.

Economies began to recover and as people found more money in their pockets, the natural way to spend it was with parties, drinking, and celebrations.

Nightlife grew in popularity (even despite the Prohibition) and with it came a demand for more jewelry for women.

However, precious gemstones were still far too expensive for most women and so, costume jewelry became popular.

This type of jewelry was much more affordable, easier to source, and if it broke during a hard night of dancing - then no biggie!

The most popular type of costume jewelry was pearl necklaces. They were affordable to both make and buy but still added a luxurious and expensive look to women’s outfits.

They were also further popularized by Coco Chanel, who cemented pearls as a symbol of status. So, every woman wanted to wear pearls to show off their wealth - even if they weren’t real pearls!

Women would wear multiple pearl necklaces varying in length, and soon pearls were also commonly worn as bracelets and rings.

Basically, the more pearls you wore, the more wealthy you were perceived to be. This means that to get that Roaring 20s look, you need to try and incorporate pearls into your outfit.

Flappers: What Are They And What They Wore

There are two types of Roaring 20s styles that most people fall into whenever they try to replicate the vintage look.

Flappers is the term used for young women who were known for their energy and zest for life.

As a result, ‘flappers’ were viewed with disapproval but in truth, they were the youth who first began to push the barriers for women in a range of different areas.

The flapper style shares a lot in common with the other fashion styles of the decade but they took things a little further.

However, they still avoided corsets and kept a sleek silhouette although the difference between their waist and hips was more noticeable.

The reason for this is obvious - dancing.

Flappers were the party animals of the 1920s and by having a dress that came above the knee and clung a little more tightly to the body, they could move and dance with more freedom.

Dancing also influenced the skirts of their dresses as they featured a lot of fringe or pleats to create a dazzling flare while they danced.

Even their jewelry differed. Although pears were still popular among flappers, long pearl necklaces which could easily be grabbed and pulled and broken were usually swapped for multiple bracelets and bangles which could create a great effect as they danced.

So, you know how to set your silhouette, what accessories you should wear, and how to style your hair for the ultimate 20s outfit. Here are some example dresses to check out to inspire you.

Although this dress is labeled as a ‘flapper’ dress, the high neckline makes it better suited for cocktails and more laid-back parties.

This makes it great for evening events. The higher hem still allows for dancing, as does the fringe and sequins.

This dress is a great one to go with if you are looking for something for formal events. It still feels vintage with a touch of modern, but ticks all the boxes for an authentic 1920s dress.

Finally, this is our ultimate choice for the best flapper dress. It has the length, the neckline, the sequins, the range of colors - everything you could need.

Just pair it with the right shoes and accessories and you will look like an authentic Roaring 20s flapper!

And that’s how you get an authentic Roaring 20s look. Follow the above rules for guidance referring to silhouettes and accessories, and you will be able to get the perfect 1920s style for all kinds of events. Enjoy!

Willa Price
Have you ever thought that you were born in the wrong generation? That you would have suited the 80s better? The 70s, 50s, or even the 30s?

Then welcome to my website, where you’ll fit right in. Hi, my name is Willa Price and I am a self-confessed fashion lover.

I specialize in vintage fashion at a designer label, and it is my dream job. I spend my days reinventing old pieces and reworking them into modern fashion trends.

Please, enjoy my website as you take a step back in time to relive the fashion evolution that we are still moving through now.